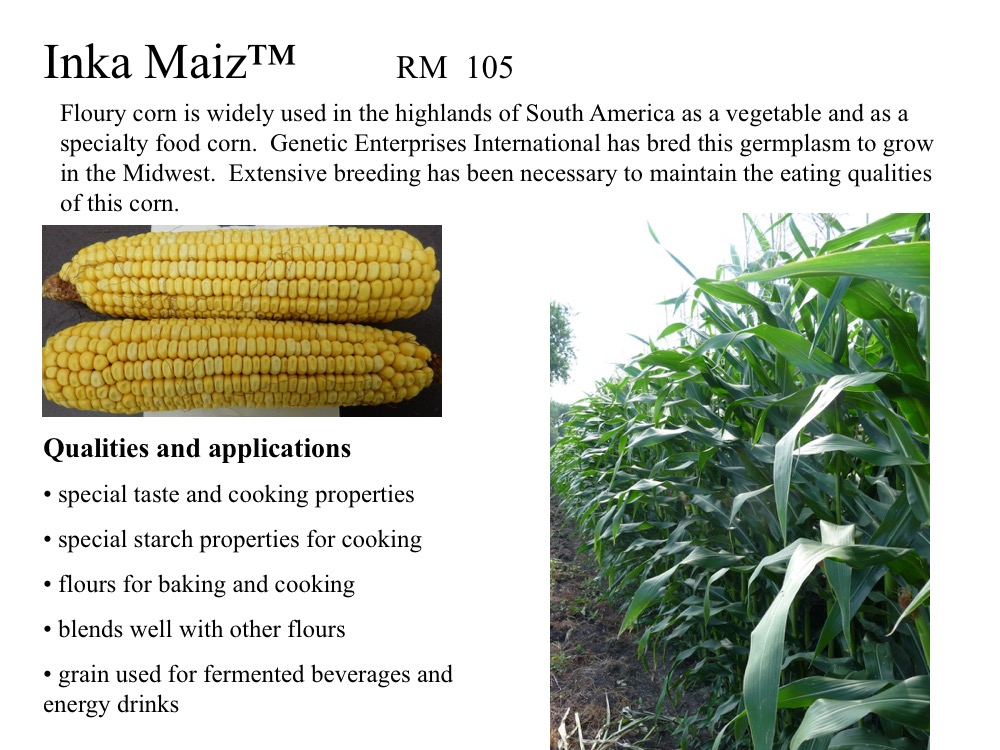 Corn, a species native to the Americas, has been intertwined with the life of the native populations of the Americas for centuries.  Corn evolved from teosinte (a grass-like plant scattered throughout Mexico and Central America) into the many races of corn.  Peru was one of the centers of origin of corn.  The species spread northward  evolving into many races with distinct characteristics.   Over the centuries, the native populations selected the corn species to develop the many varieties still in cultivation by local farmers in small plots in the highlands of the Andean Region.  Germplasm collections have been made over the years, studied and cataloged.  Most of these collections are conserved in germplasm banks.

During the Inka Empire, corn was a very important component of the food supply of the population.  Inka cornfields were planted and tended to by people especially assigned for the purpose.  Corn was produced for food to be eaten at the green stage, cooked or ground into a dough for making breads or tortillas.  Mature corn was also dried to be eaten as parched corn or made into flour for cooking.  Most of the harvest was stored for eating during the dry season and to feed the king’s armies.  Corn was an integral part of ceremonial and religious celebrations.  It was used for preparing chicha, a fermented corn liquor that was consumed during the Inka celebrations.  Chicha was also drunk by the field workers to quench their thirst and to give them energy for doing arduous work.  Inka tribes lived in settlements along the Andean mountain range.  Races of corn with distinctive ethnobotanical characteristics have been found in every country of the Americas.  Many corn varieties evolved through isolation and selection over time from these racial groups.  Ear corn of some of these varieties can still be found in farmers’ markets in the Andean region.  In modern times, varietal collections have been kept in germplasm banks by international research institutions and local governments.

Genetic Enterprises International, a corn breeding and research company based in Iowa, developed Inka Maiz™.  This is a hybrid corn that has germplasm from a pool of the principle races of food corn of the Andean region of South America and germplasm from the U.S. cornbelt.  The Inka Maiz™ hybrid can be grown in the early to mid- maturity zones throughout the cornbelt.   Inka Maiz™ has the food characteristics of the Andean floury corns and the adaptation of the U.S. temperate zone.